President Ibrahim Mohamed Solih has called on all atoll, island and city councils to provide their support to the government in implementing decentralised development nationwide. The President made this statement during his meeting with the North Miladhunmadulu Atoll Lhaimagu Island Council and Women's Development Committee (WDC), earlier this afternoon at the Secretariat of the Lhaimagu Island Council.

President Solih reiterated that councils now have the authority and financial autonomy to shape the direction taken in the development of their constituencies. He urged them to use the resources provided to them to best benefit their constituents.

Councillors raised several concerns from residents of Lhaimagu Island, centred mainly on augmenting the ongoing expansion of the local harbour, coastal protection and improvements to electricity service. Members of the council further noted that the island requires healthcare upgrades and the establishment of police presence, among other needs pertinent to the progress of the Lhaimagu Island.

Addressing the concerns raised during the meeting, President Solih advised the council to approach the proper government agency regarding the augmentations to the ongoing harbour expansion project. He shared the latest updates of developmental projects and programmes ongoing and planned for the island. In this regard, he said that with the reform of the police service, Lhaimagu Island would have locally stationed police, stating that he would highlight their request to prioritise their island. He also said he would raise the issues shared by the council to the relevant government agencies to find swift solutions.

Following the meeting, the President and First Lady visited the site of Lhaimagu Harbour expansion project. The First Lady also visited and toured Lhaimagu School and later met with a group of women at the harbour. 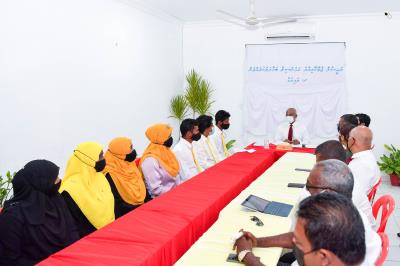 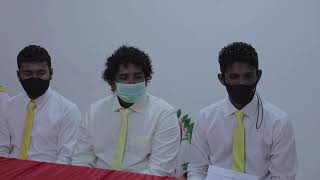