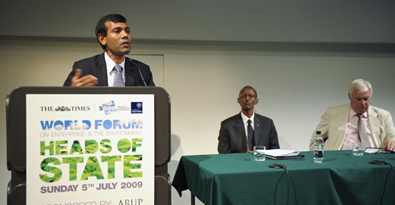 President Mohamed Nasheed has said that the government gives high priority to invest in economically viable renewable energy and for the success of the climate negotiations in Copenhagen. The President made this statement yesterday evening while speaking at the heads of state session of the World Forum on Enterprise and the Environment. The Forum was held at Keble College, Oxford.

Stressing that as scientists warn that another two degrees rise in global temperature could cause unprecedented catastrophe, the President called on the international community to act decisively.

The President also stressed that decisions on climate change can no longer be put off and expressed his hope for the success of climate negotiations in Copenhagen.

Stating that cutting down on greenhouse gas emissions and identifying successful adaptation measures were now urgently needed, President Nasheed said that an agreed outcome in Copenhagen could be achieved if all work together to combat the climate crisis.

The Forum is designed to be a three day event where delegates will have the opportunity to explore whether there is a model for low carbon growth and on how to de-fossilise our economies without harming economic growth.

Former US Vice-President Al Gore and Rwandan President Paul Kagame will also be amongst the speakers at the Forum.