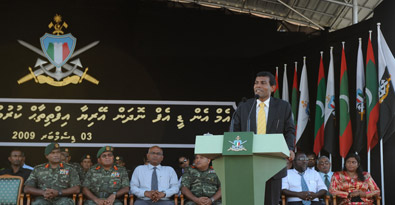 Speaking at the inauguration ceremony held this evening at Naifaru of Faadhippoplhu atoll, the President expressed confidence that the Northern Area Headquarters would play the most important role in protecting the region.

He also noted the role of MNDF in protecting the people of the Maldives and thanked the MNDF for their hard work.

In his speech, the President said that the government’s aim was to bring greater development and prosperity to the people of Naifaru and to the whole country. In this regard the President spoke on the developmental projects planned for Naifaru.

Minister of Defence and National Security Ameen Faisal, Chief of Defence Force Major General Moosa Ali Jaleel, and the Commander of the MNDF Northern Area Brigadier General Ahmed Mohamed welcomed the President on his arrival at the Naifaru Stadium for today’s ceremony.

Earlier this afternoon, the President visited Madivaru and officially unveiled the Headquarters of Maldives National Defence Force Northern Area. He also launched the Rescue Coordination Centre at the Northern Area.

President Nasheed began his tour to Faadhippolhu atoll this afternoon. During his tour, President Nasheed will also launch the land reclamation project in Naifaru. The function is scheduled to be held tomorrow.
SHARE:
Copied!
LATEST FROM THE PRESS OFFICE