Our future depends on collective commitment to unify the world despite differences: President Our future depends on collective commitment to unify the world, despite the differences among us, President Ibrahim Mohamed Solih has said. The President made this remark while speaking at the High-Level Meeting held to commemorate the 20th anniversary of the adoption of the Durban Declaration and Programme of Action.

Emphasising the importance of unity, President Solih said that communities are most susceptible to fractures when they are too weak to empathise with the suffering of others. “Intolerance finds fertile ground in inequality; therefore, ensuring racism does not take root and fester requires us to ensure broad and inclusive development,” President had said.

President Solih noted how racism and intolerance thrive in instability and inequality and stated that concrete effort needs to be put in to prevent these maladies from disrupting our harmony.

In his address, the President stated that we must renew our vow to create a new future that is free of racism for our children and grandchildren and to ensure economic prosperity is shared and no one is left behind. 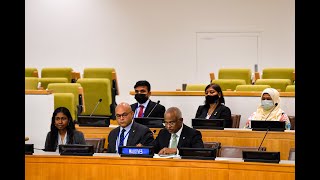