President Ibrahim Mohamed Solih has met with the members of the South Maalhosmadulu Atoll Thulhaadhoo Island Council. Councillors highlighted the ease with which they are able to obtain support and aid from government agencies for their projects and activities on the island, extending their gratitude to the President. The Member of Parliament for the Thulaadhoo Constituency, Hisaan Hussain, also joined the meeting.

Speaking at the meeting held this afternoon at the President's Office, members of the Baa Thulhaadhoo Council relayed several challenges and requests from their constituents. They said that residents had revealed concerns regarding the airport project in Thulaadhoo Island, as well as the lack of space at the local harbour. Councillors delineated difficulties faced due to space scarcity on the island, discussing land reclamation, the fifty housing units constructed on the island and the projects to construct a further fifty housing units. They also discussed healthcare expansion, among other topics.

Councillors updated the President on their activities on Thulhaadhoo Island, highlighting the ongoing shore protection programme and football field project on their island.

President Solih addressed the issues raised during the meeting, sharing the latest details regarding the projects being conducted on the island by the government. He stated that the fifty housing units constructed on the island would be evaluated by the relevant ministry to determine a feasible solution. He further revealed that the airport project was currently in the bid evaluation phase. The President affirmed that he would raise all discussed issues with the relevant government agencies to find solutions, urging the council to consider regional growth while formulating development plans for their island. 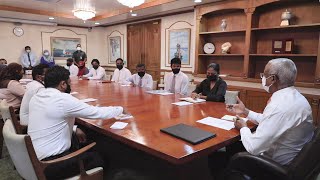