President Ibrahim Mohamed Solih and First Lady Fazna Ahmed have attended an official banquet hosted by the President of the People’s Republic of Bangladesh, Md. Abdul Hamid, as his honoured guests. The banquet was held at the Presidential Palace of Bangladesh this evening.

President Solih and First Lady Fazna are currently on a two-day state visit to Bangladesh with a high-level Maldivian delegation. In Dhaka, President Solih attended the official ceremony commemorating the ‘Birth Centenary of Bangabandhu Sheikh Mujibur Rahman’ followed by official bilateral talks between the delegations of the Maldives and Bangladesh. Four MoU’s were also signed to further strengthen the mutual relationship between the two countries. 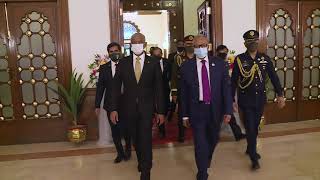 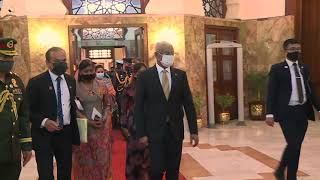