TBS is a facility under the Military Skills Training branch, one of two branches under MNDF’s Training and Education Command. TBS specialises in core military skill development and training instructors to conduct basic military training.

Following the inauguration, President Solih toured the island of Maafilaafushi. He visited the Administrative Building, which handles all administrative work for TBS and includes clerical offices for the CTC, Northern Area Headquarters (NAHC), Coast Guard (CG) and Marine Core (MC). He also toured the TBS Compound where the event was held. The compound has the capacity to simultaneously accommodate 190 trainees, and is equipped with all provisions and necessities required by their trainees. 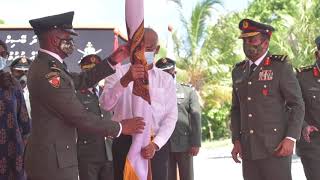