President Solih presented the new members with their letters of appointment at a ceremony held today at the President's Office. The Chief Justice of the Supreme Court, Hon Uz Ahmed Muthasim Adnan, administered their oaths of office during the ceremony.

Aminath Shifaath Abdul Razzaq holds a Master of Criminology from the University of Sydney, Australia. She had previously served as the Acting Secretary-General of HRCM and most recently served as HRCM's Director of Research and Monitoring.

Moomina Waheed is a graduate of the University of Sydney, Australia, and holds a Masters of Human Rights and Democratisation (Asia Pacific). She had previously served as the Human Resources Manager at Tree Top Hospital and most recently served as a consultant on the delivery of the labour and employment mandate at the Ministry of Economic Development (MoED). Moomina Waheed was also employed at HRCM in different positions for 9 years.

Dr Ahmed Adham Abdulla holds a Doctor of Philosophy in Law (International Law) from the University of Wollongong, Australia. He previously served as a Lecturer for Public International Law at Villa College. He is also a recipient of the President's Award for Achieving the Highest Academic Qualification, and of the Australia Leadership Award.

President Solih appointed the three members to the HRCM under the powers vested in him by section 5 (a) of the Human Rights Commission Act (Act 6/2006), which stipulates that the members of the Commission shall be appointed by the President after approval from the Parliament. 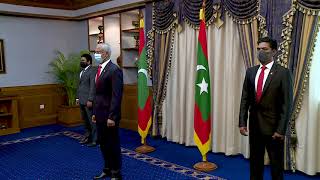