As part of the ongoing visit to islands in North Thiladhunmathi Atoll, Vice President Faisal Naseem visited Dhidhdhoo Island and has met with the Councillors of North Thiladhumathi Atoll Council. The meeting took place this afternoon at the Secretariat of the Dhidhdhoo Island Council.
During the meeting, the Councillors shared the urgent issues faced by different constituencies of the Atoll, and shared their concerns, and discussed ways to bring further development to various sectors of the Atoll.
Speaking at the meeting, Vice President Faisal Naseem said that with the full implementation of the Decentralisation Act, the roles and responsibilities of the Councillors will be greatly increased and the budgetary changes will help address a majority of the concerns raised by the Councillors. Acknowledging their concerns, he said that he would work to remedy the issues brought up after discussing with the relevant authorities. 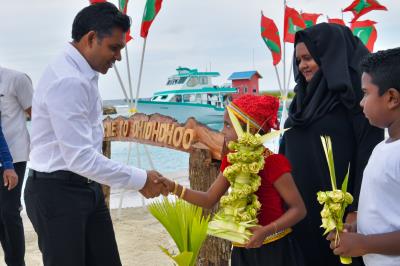