President Ibrahim Mohamed Solih has met with the members of Meedhoo Island Council of South Nilandhe Atoll this afternoon at The President’s Office.

During the meeting, the Councillors presented the priorities and concerns raised by the island’s residents, as well as various development projects proposed for the benefit of their constituents.
Moreover, the Councillors shed light on the most pertinent and urgent needs of their residents, including the expansion of the Meedhoo harbour, relocation of the powerhouse, allocating land for housing and other infrastructural projects.

The President stated that the government would take the necessary action after discussing with relevant line ministries to address the specific issues and concerns raised. 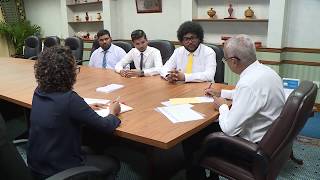