President Ibrahim Mohamed Solih has stated that the real objective of the scholarships given by the government will be achieved when the students start contributing to the development of the nation. He made this statement in his address at the awarding ceremony of the President's Award & High Achievers Scholarship for GCE A-level top achievers in the year 2018, held at the Stelco auditorium this evening.

In the President’s remarks, he noted that in order to attain the kind of development the Maldivian people aspires, the main policy of the government in building the nation is focused in the area of human development; thus the education policy is headed in this direction stated the President.

Moreover, the President shed light on the changes being brought to the policy of giving out the President's Award and stated that previously these students can only choose higher studies from a list of areas allocated by the government and that the new policy has removed such restrictions starting from this year onwards. He also stated that under the new policy the scholarship achievers can choose any field of study from any country of desire.

Furthermore, President Solih shed light on the other policy change regarding High Achievers Scholarship and indicated that under the new policy the government has removed the restriction of limited fields and countries to choose for higher studies. In this regard, he stated that now the students can choose from OECD countries for studies as well. With the new changes, high achievers Scholarship holders will get the advantage of choosing from an additional 36 countries worldwide including America, Asian and European countries. He also stated that the policy change was brought by the government for the benefit of the youth population in the country.

Speaking during the event, Presiden Solih also reminded the students of their patriotic duty to the country and emphasized on their importance in developing the country. 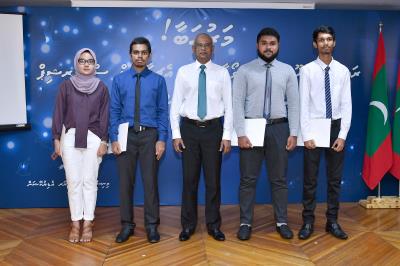