President Ibrahim Mohamed Solih has stated that the government has bought a positive change to the lives of Maldivians within a short period of time. He made this statement at the meeting held regarding the 100 Working Days pledges held this morning at the President’s Office.

At the meeting held this morning marking the 10-day countdown to the end of the Government’s initial hundred working days, and celebrating the progress made in fulfilling their pledges relevant to this period, the President highlighted that the government has accomplished 83 percent of the 163 hundred working days’ pledges, and that his administration is working hard to ensure that the remaining pledges are also successful.

The President noted that of the remaining tasks, he wanted to prioritize those that would reduce discrepancies in the quality and provision of basic services between Male’ and other islands; lay a foundation for a truly decentralized form of government; address gender discrepancies in the workplace; and strengthen the national anti-corruption framework, whilst simultaneously increasing government transparency.

Speaking in these regards, the President announced that electricity prices would be reduced at a national scale effective from 1st April onwards, by reducing taxes on diesel by five percent. He emphasized that these efforts would not only increase every household’s disposable income by allowing them to save on electricity prices but that it was also a business-friendly measure that would reduce the costs of running a business.

He reiterated that his administration is committed to decentralization and that of its many aspects, the government will place special emphasis on fiscal decentralization. This is to be accomplished by giving councils wider discretion to collect revenue which they can use for the benefit of their own communities.

The President also stated that he wanted to ensure that a culture of anti-corruption and transparency takes root in the Maldives’ government. To these ends, through the assistance of the Ministry of Finance and Treasury, the government will henceforth publish the State’s financial standing on a weekly basis, for the public’s benefits.

In addition to shining a light on the myriad efforts underway relevant to fulfilling the Government’s initial 100 days’ pledges, President underscored that these are all driven by an underlying spirit of being of assistance to the Maldivian people. He stated that the government will work tirelessly to ensure the quality of lives of all Maldivians will quickly and significantly improve. 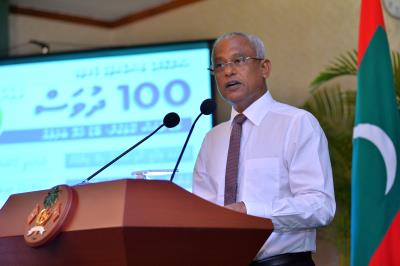