A delegation of European Union Ambassadors paid a courtesy call on His Excellency, President Ibrahim Solih, following the conclusion of the Fourth Policy Dialogue between the Maldives and the European Union held earlier today at Kurumba Maldives.

The President and the Ambassadors briefly discussed on a range of issues, focused primarily around the Maldives’ political situation, with especial regard to the upcoming parliamentary elections, due to be held next month.

President Solih reiterated his Administration’s commitment to ensuring free, fair and competitive elections, in accord with this government’s commitment to reinvigorating the Maldives’ democracy consolidation and strengthening process.

Moreover, the President noted that this government is eager to engage with the EU on a range of mutually beneficial policy issues, emphasizing the prospect of enhancing trade between the Maldives and EU States. Similarly, the Ambassadors discussed ways to facilitate investment and economic cooperation between EU States and the Maldives.

Concluding the call, the Ambassadorial delegation praised the success of the Government’s 100 days’ agenda, and wished the President well in fulfilling his responsibilities towards the Maldivian people. 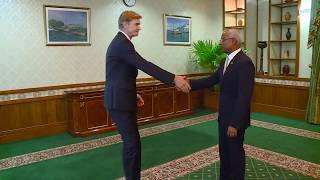