President Solih meets with the members of Fenfushi Island Council President Ibrahim Mohamed Solih has this afternoon met with the members of the South Ari Atoll Fenfushi Island Council.

At the meeting held at the President’s Office this afternoon, members of the council briefed the President on their plans for the development of Ukulhas Island, and the economic endeavors ready to be undertaken. They especially highlighted the land use plan of the Island.

The Council members also noted the challenges being faced due to the lack of proper clean water and sanitation system in the island. Further, they highlighted the difficulties faced due to lack of a laboratory at the Health Centre and pending requirements of the island school. Additionally, they shed light on the needs of youth such as sports facilities.

Speaking at the meeting President Solih stated the government would take necessary action after discussing with the line ministries and tackle these problems. 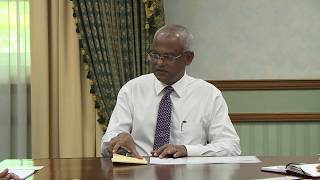