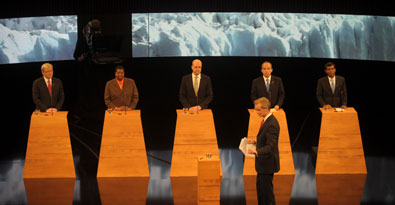 President Mohamed Nasheed has participated in a special edition of BBC's World Debate, entitled the “Greatest Debate on Earth”.

The debate, which was hosted by BBC World's HARDtalk host Stephen Sackur, was recorded live in Copenhagen and shown at 1.15am Malé time Thursday night.

In the debate, the President emphasised the importance of seizing the opportunity to come to an agreement to save the planet.

The President added that in that sense, “we [the whole world] are all Maldivians”.

The debate was recorded at the New Concert Hall in Copenhagen and was attended by over a thousand people.