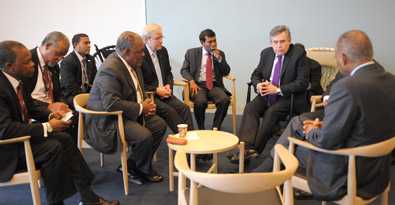 In a relentless effort to continue the process in Copenhagen, President Mohamed Nasheed has yesterday met with Prime Minister Gordon Brown of Britain and Prime Minister Kevin Rudd of Australia, along with leaders from other developing countries.

Discussions were focused on ways to move forward and on the need to seal a deal in Copenhagen.
Speaking at the meeting, the President stressed that the Maldives, more than any other country, needed these talks to succeed.

On other developments, the Maldives’ “survival kit’ was launched yesterday evening at Copenhagen. The launching ceremony was attended by Dr Rajendra K. Pachauri, Chair of the Intergovernmental Panel on Climate Change (IPCC) as well as heads of other organisations.

Speaking at the meeting, the President expressed concerns over the direction in which the negotiations were going. He also emphasised on how important it was to come to an agreement in Copenhagen.

The President also spoke on the vulnerability of the Maldives to climate change and said that to address the issue, the Maldives was doing its part by becoming carbon neutral in ten years time.

In March this year, the Maldives announced its intention to make the Maldives the world’s first carbon neutral country, and since then the Maldives have signed two agreements with two international energy companies to build large wind farms.