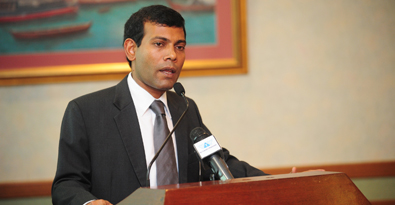 The government’s aim was is to foster development in the northern region through the development of Hanimaadhoo airport to an international airport.

He made this statement while speaking at the MoU signing ceremony with GMR Infrastructure Global Limited to develop a trendsetting international airport at Hanimaadhoo in the Upper North Province. The ceremony was held this afternoon at the President’s Office.

In his speech, the President noted that airport development was linked with tourism development and that the government was now in discussion with GMR to build resorts in the Maldives with a total bed capacity of 6000.

He further added that this would create a new type of tourism market in the Maldives and that it would benefit the whole country.