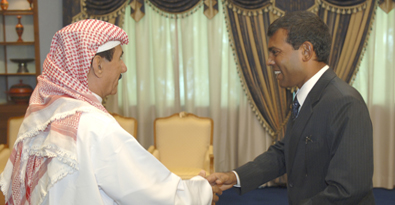 President Nasheed has inaugurated the silver jubilee celebrations of the North Thiladhunmathi School at a function held this evening at the school. Speaking at the function, the President said that the government planned to upgrade the school.

Addressing the people of Dhidhdhoo at this function, the President informed them of the developmental projects planned for the island. He said that the government has signed an agreement with a Dutch company on the land reclamation project of Dhidhdhoo. In addition, he said that 100 housing units would be built in the island and that the water and sewerage project would begin this year.