The Vice President pays a courtesy call on the UNPGA The Vice President called on the UNPGA after delivering his remarks at the ongoing UNGA high-level thematic debate on "Putting sustainable and resilient tourism at the heart of an inclusive recovery."

Highlighting the UNPGA’s work at the meeting, the Vice President noted his efforts to promote equal rights for women and youth voices. He recognised the UNPGA’s role in combatting the climate crisis and bringing attention to vulnerable states facing the highest impacts of climate change. The Vice President also expressed his gratitude to the UNPGA for his role in attracting foreign aid and investment to the Maldives as the Minister of Foreign Affairs.

The Vice President is accompanied on his visit to New York by his spouse and a high-level delegation. 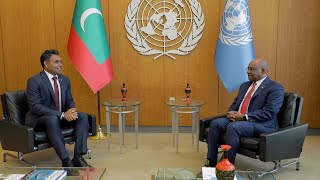