Vice President Faisal Naseem on Friday evening stated that being in good health is one of the greatest blessings bestowed upon us by Almighty Allah. He made the remark while speaking at the official ceremony held at Ghiyasuddin International School to mark the World Health Day.

The Vice President stated that meaningful good health required a healthy living environment. He noted the administration's efforts to promote environmental sustainability, and emphasised President Ibrahim Mohamed Solih's international advocacy on environmental protection. The Vice President highlighted the President’s remarks at the United Nations General Assembly (UNGA) and the most recent Conference of Parties (COP) summit, where he urged world leaders to commit to the climate goals.

The Vice President also reaffirmed the government’s commitment to make basic healthcare more accessible to all citizens and noted the efforts to establish tertiary-level hospitals in five regions across the country. He emphasised the importance of training healthcare professionals to meet the needs of the new hospitals and other healthcare facilities.

The Vice President had inaugurated the Green Smart Island Project at the ceremony. Representatives of local councils signed the commitment regarding the Green Smart Island Project, while the Minister of Environment, Climate Change and Technology, Aminath Shauna inaugurated the Climate Smart Hospital Policy Strategy. The Minister of Education, Dr Aishath Ali, inaugurated the Inter-School Art and Short Story Writing Competition. The ceremony was attended by Cabinet ministers and senior government officials. 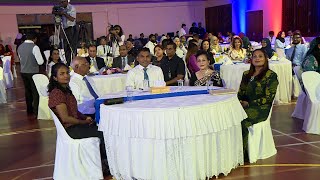