President Ibrahim Mohamed Solih on Sunday afternoon met with members of the Dhiffushi Island Council of Kaafu Atoll. The meeting was held this afternoon at the President's Office, where the council members shared the most pertinent needs and concerns of the residents.

In this regard, the council members noted the challenges facing the residents due to coastal erosion and the lack of a water and sewerage system in the industrial zone of the island. Other topics discussed at the meeting include the need for land reclamation and upgrading healthcare services, including laboratory and ambulance services. On education sector development, the council members highlighted the need for a multi-purpose hall for the school and the introduction of higher secondary education. They also spoke about the need for a new mosque and police services, in addition to expediting the development of the football stadium.

Speaking with the council members, President Solih shared the progress and latest updates on the ongoing and planned developmental projects for the island. He stated that coastal protection works would be completed alongside the land reclamation project and informed them that the government would provide ambulances and establish police services as per the ongoing plans.

He further assured the council members that the government would seek ways to address their concerns. 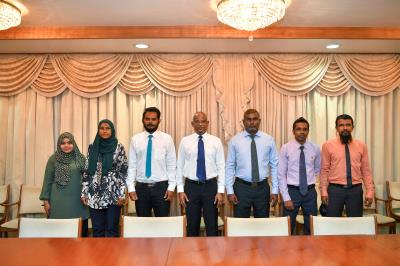 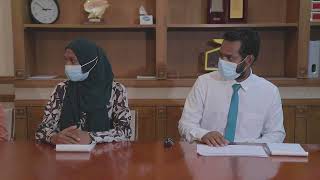