Vice President Faisal Naseem on Wednesday morning appeared on a special edition of "Baajjaveri Hendhuneh," the morning show of Dhivehi Raajjeyge Adu (DRA), broadcast as part of DRA’s 59th-anniversary celebrations. There, he extended his felicitations on the occasion to the management, staff, and listeners of DRA.

On the show, the Vice President spoke about his personal and professional life, sharing his childhood memories and experiences from his time in school. The Vice President shared his childhood passion for sports, especially football, and spoke extensively about the need to integrate physical activities into the education system. Speaking on the road to success, he named familial kinship as something we should cherish.

On the show, the Vice President also spoke with and shared his thoughts with some callers, including family members, friends, and members of the public. 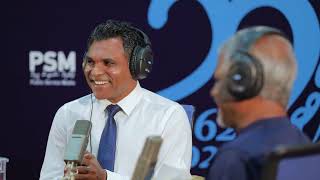