Reaffirming the administration’s commitment to human resources development, Vice President Faisal Naseem on Tuesday afternoon stated that economic growth is synonymous with increasing capacity-building efforts, especially in the aviation industry. He was speaking at a ceremony held at Maldives National University (MNU) to officially inaugurate the Maldivian Aviation Academy.

The Maldivian Aviation Academy is a collaboration between Island Aviation Services Ltd., MNU, and the Czech Republic-based Flying Academy. The flying school's programmes are now open for enrolment; however, student pilots who have had to discontinue their training for a variety of reasons will be given precedence.

Speaking at the ceremony, the Vice President shed light on the efforts of the administration to address the numerous concerns and challenges faced by the Maldivian student pilots enrolled in training programmes in the Maldives. He said the new flight training school inaugurated today is a testament to those efforts.

Highlighting the progress of the aviation industry in the country, the Vice President spoke about the importance attached by President Ibrahim Mohamed Solih and his administration to human resources development and capacity building. He concluded his speech by urging students who will be studying at the new flight training school to make the most of this opportunity and to work together in order to give good service when they enter the industry. 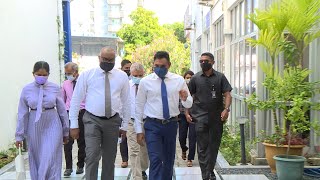 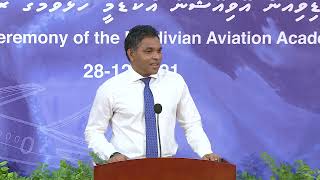