President Ibrahim Mohamed Solih, on Thursday afternoon, met with members of the South Ari Atoll Fenfushi Island Council. At the meeting held at the President’s Office, the council members shared with the President the most pertinent needs and concerns of the residents of Fenfushi Island.

Some of the concerns raised by the council members were related to the sewerage network and harbour development projects, in addition to the need for a water supply network on the island. They also spoke about the need for additional classrooms in the Fenfushi School extension block and the relocation of the health centre.

Speaking at the meeting, President Solih underscored that his administration does not favour islands in the provision of basic services and developmental projects based on their population. On the concerns raised by the council members, President Solih assured them that he would discuss it with the relevant ministries to address their grievances. He then briefed the council members with the latest on the developmental projects planned for the island. 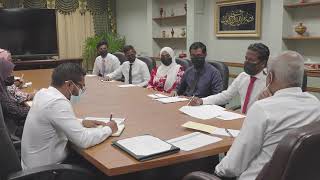