The Vice President conveyed the government’s gratitude for the generous assistance from South Korea in the Covid-19 pandemic.

The Ambassador noted that the Maldives is a popular destination for South Korean tourists. In that regard, promoting Maldives’ tourism in South Korea to further increase tourist arrivals was discussed.

Speaking about climate change, the Ambassador praised Maldives' participation in the UN Climate Change Conference of the Parties (COP26) held in November in Glasgow, United Kingdom. The Vice President noted that climate change has always been a pressing issue for the Maldives and stressed the importance of wealthier nations supporting low-lying small island states such as the Maldives to adapt to the effects of the climate crisis. Both sides expressed interest to expand cooperation on climate action and advocacy, including the transition to renewable energy.

The Vice President and the Ambassador also underlined their governments’ commitment to continue working together on international issues of mutual concern. 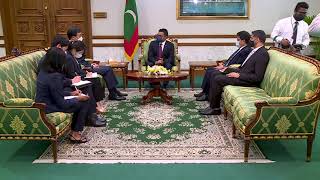