President Ibrahim Mohamed Solih has met with members of the farming community and guesthouse owners from Thoddoo Island of North Ari Atoll, sharing their concerns regarding their needs and challenges faced while carrying out their tasks. The discussions were held this morning at the Thoddoo Agricenter by State Trading Organisation (STO).

During the meeting, guesthouse owners raised queries regarding receiving the fees levied as green tax from tourists on the island. They also mentioned the difficulties they experience as a result of dissimilar electricity rates charged for small and mid-size enterprises. Farmers further expressed their concerns about not being able to obtain farming equipment and resources at fair prices.

The President stated during the meeting that the administration is working on development plans for the Thoddoo Island while keeping the island's flourishing local tourism and agriculture sectors in mind. He stated that the administration is currently working on a harbour extension project, and the water and sewerage project had been awarded. Following the completion of this project, the road development project will be started on the Island.

In response to the farmers’ concerns, the President highlighted that the government had previously slashed import duties on various agricultural commodities, but that the government had observed the farmers are not much benefited. Furthermore, President Solih added that the administration is thinking on to provide farmers with low-cost high-quality agricultural goods through Agro National Corporation Ltd (AgroNat) or STO, allowing the state agencies to import duty-free farming resources to supply directly to farmers at fair prices. He also stated that the administration is aiming to extend the lease period for farmland after discussing with the island councillors.

In response to guesthouse owners' concerns, the President stated that the green tax levied from tourists are utilised for environmental protection programmes and urban developments such as water and sewerage projects. He concurred that the majority of levied green tax should be utilised for the development of that island, adding that the government would apply this in practice.

Prior to the meeting, the President toured the Thoddoo Agricenter by STO, where he examined agricultural items cultivated from the Thoddoo farmlands. There are currently 266 farmers registered at AgroNat. President Solih also went on a tour of the harbour development project site on the Island.

Thoddoo Island is the President’s first destination on his current two-day trip to six islands of North Ari Atoll. President Solih is accompanied on this trip by a delegation of cabinet ministers and senior officials from the government. 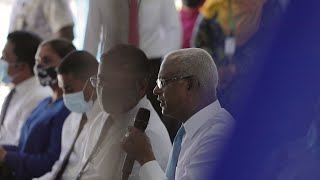