Addressing the audience, the President stated that certain challenges limit the progression of the farming industry. Citing the issues accentuated at yesterday’s “Farmers Forum”, he emphasised that space constraints on inhabited islands had restricted some opportunities for the industry to thrive, given most farming is carried out in inhabited islands. He added that the administration will work with local councils to seek long-term lots at reasonable rates for farming activities.

President Solih applauded the Kandoodhoo farming community for the huge impact it has had on the farming sector, highlighting that “Kandoodhoo Mirus”, chilli peppers produce on the island had branded itself as a prime product with high demand and that farmers from across the country had followed their lead.

The President stated that farmers face numerous challenges in providing fresh food items to the market. Stressing that countries such as the Maldives, with limited landmass, would need to adapt and incorporate modern technological advances and scientific data in farming activities, President Solih highlighted that relaying the information to farmers had been a challenge. He further stated that despite the availability of loans for agricultural purposes, these opportunities had not been properly communicated to most farmers.

Highlighting that 17 types of fruits and vegetables that ensure food safety are already locally harvested, the President stated that the government plans to curtail and levy taxes on the import of these food types to encourage locally grown produce to enter the market, therefore ensuring food safety. Although the agriculture sector currently contributes only 1.7 per cent of the GDP, the President remarked that there is enough demand for fresh produce to improve the rate of contribution to the GDP from the farming and agriculture industry.

Reiterating that the lack of farming space is detrimental to the improvement of the local farming industry, the President noted that adopting new technologies such as vertical farming methods may help begin to address the issue. As much of farming is reliant on the use of chemicals in producing harvest, he urged farmers to embrace organic farming methods and eco-friendly products. He added that the development of farming is essential to the decentralisation of the economy and improving the quality of life.

President Solih awarded plaques to two individuals for their contributions to the advancement of the agriculture sector during tonight’s ceremony. 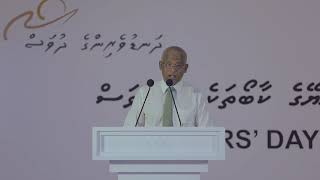 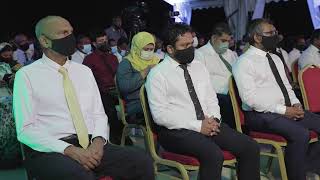