H.E. Hussain Al Saharty, the Ambassador of the Arab Republic of Egypt to the Maldives, has paid his farewell call on H.E. President Ibrahim Mohamed Solih. The meeting was held this morning at the President’s Office.

Speaking with Ambassador Al Saharty, President Solih conveyed greetings and best wishes to the President of the Arab Republic of Egypt H.E. Abdel Fattah el-Sisi. He further conveyed his gratitude to the Ambassador and the Egyptian government for their continued support and assistance accorded to the Maldives in various platforms over the years.

In this regard, President Solih highlighted the scholarship opportunities awarded to Maldivian students from Al-Azhar University and the Egyptian assistance given to Maldives in the human resource front. He also shed light on the high-level political consultation that took place in 2019 stating that it further solidified the bilateral relations between both countries.

The President and Egyptian Ambassador also held discussions on improving people-to-people contacts, collaboration in the international arena on mutual interests especially in relevance to protecting the Islamic faith and work relating to Organization of Islamic Cooperation (OIC). They also discussed regarding expanding cooperation in trade and business between both countries.

Speaking at the meeting, Ambassador Al Saharty applauded President Solih and his Administration for the hospitality and assistance displayed in enhancing the bilateral relations between both countries and further expressed the Egyptian government’s keenness to enhance cooperation in fields of mutual interests between both countries.

The President also commended on the impressive work Ambassador Al Saharty did in further solidifying the relations between Maldives and Egypt and wished him well in future endeavors. 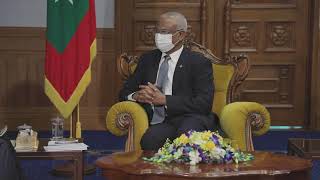