Vice President Faisal Naseem has met with members of the Laamu Atoll Council, at the President’s Office earlier this morning.

During the meeting, the Vice President and councillors engaged in discussions focused on the improvement of infrastructure and enhancement of services available to the resident population. Issues discussed in the meeting included a shortage of healthcare resources and staff in some islands, the need for expediting ongoing resort development projects, speeding up the two causeway projects planned, accelerating the establishment of a Maldives National University (MNU) campus and the cancer hospital. They also noted the difficulties faced in school management due to space constraints and shortage of staff and other resources.

Councillors expressed their interest in the further development of tourism in the atoll. They also conveyed the need for creating ample job opportunities for the resident youth and for them to be able to obtain basic services without the need to travel to Malé City. Councillors were also vocal regarding rehabilitating young victims of drug abuse.

Speaking at the meeting, Vice President Faisal Naseem assured the government's aid in addressing the issues and concerns raised by the councillors, stating that he would speak with the relevant authorities to remedy the issues. He stressed that the administration would not discriminate against any island, urging to swiftly complete all developmental projects in the islands. He also instructed the council to directly approach the relevant institutions to resolve some of the matters discussed.

Concluding the meeting, the Vice President advised the council to ensure a safe and secure environment for students and to hold awareness sessions for the children. 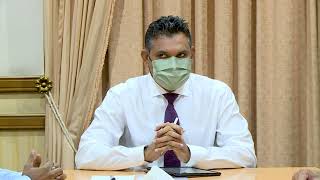