His Excellency President Ibrahim Mohamed Solih has met with the Prime Minister of the State of Kuwait, His Highness Sheikh Sabah Khalid Al-Hamad Al-Sabah, on the margins of the 76th Session of the United Nations General Assembly, at the United Nations Headquarters (UNHQ) in New York City.

President Solih emphasised Kuwait's role as an important development partner for the Maldives over the years, particularly through the Kuwait Fund for Arab Economic Development (KFAED). He expressed his gratitude for the assistance provided by the Government of Kuwait, highlighting numerous priority projects funded by KFAED in the Maldives' infrastructure development and social sectors.

The Prime Minister, His Highness Al-Sabah, congratulated the Maldives on winning the UNGA 76 Presidency election. In that regard, the Prime Minister noted the urgency of combating climate change for the survival of the Maldives and the other Small Islands States. He further noted that he followed the President’s General Debate Statement closely, and expressed confidence that climate change will rank high on the General Assembly agenda during the tenure of His Excellency Abdulla Shahid, President of the 76th General Assembly

The two leaders affirmed their common interest to advance tourism cooperation, people-to-people contact and business-to-business interaction between the two countries in the coming years. Discussions also focused on collaborating on international platforms such as through the United Nations to ensure peace, security and increasing resilience to achieve the Sustainable Development Goals.

President Solih said that he was pleased to welcome Kuwaiti visitors back to the Maldives after the Covid-19 pandemic. He assured the Prime Minister that his administration would make the process as smooth and efficient as possible, and he encouraged more Kuwaiti guests to visit the Maldives. The Maldives established diplomatic ties with Kuwait on 1 December 1977. 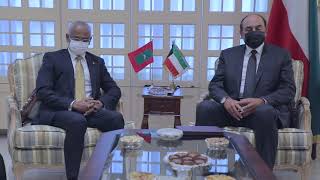