President meets Guyanese President on the sidelines of UNGA 76 The two leaders discussed numerous mutual interests, given that the Maldives and Guyana are Small Island Developing States (SIDS) and members of the Commonwealth, the Organisation of Islamic Cooperation (OIC) and Alliance of Small Island States (AOSIS). President Solih appreciated the assistance and cooperation extended to the Maldives by the Government of Guyana on multilateral platforms, most recently during the election for the UNGA 76 Presidency.

Speaking further, President Solih shared the impact of the Covid-19 pandemic in the Maldives, especially the socioeconomic repercussions from closing the Maldives' borders and effectively shutting down tourism. He noted the increase in tourist arrivals since reopening borders in July last year, stating that he looks forward to strengthening tourism cooperation with Guyana. Both President Solih and the President of Guyana expressed interest to advance sustainable tourism in both countries.

Both Presidents regarded the climate crisis as one of the most urgent global issues of our day. As leaders of AOSIS countries, the two presidents resolved to work together in the international fora to secure solid mitigation strategies and climate resilience for SIDS. They also discussed advocacy and action at the upcoming COP26 conference to be held in Glasgow, Scotland, later this year.

Concluding the call, both Presidents expressed their desire to continue strengthening bilateral relations between the two nations to promote issues of mutual interest. 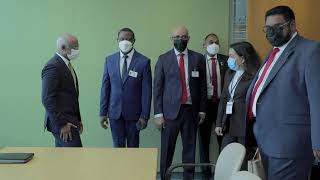