President delivers General Debate Statement at UNGA 76: Maldivians will continue to fight for the full recognition of Palestine as an independent State President Ibrahim Mohamed Solih has said the Government and the people of Maldives stand firmly and resolutely with the Palestinian people, and that the Maldives will continue to fight for the full recognition of Palestine as an independent State. The President said this in his general debate statement at the 76th Session of the United Nations General Assembly (UNGA) in New York City, today.

President Solih had previously also stated that the UN had collectively failed to resolve the issue of the Palestinian-Israeli conflict, condemning the actions of Israel, during his general debate statement in the 74th Session of the UNGA, in 2019.

Addressing the 76th general assembly, President Solih stated that despite decades of United Nations efforts, the Palestinian people have yet to see justice. He stated that we continue to bear witness to the inalienable rights of the Palestinian people being so wantonly violated, in ever-escalating ways, by Israel. Despite the many resolutions of both the General Assembly and the Security Council, the rights of Palestine are minimal or non-existent.

Speaking as the head of a small island state who is able to stand in front of the general assembly because the Maldives was recognised as a sovereign nation, President Solih questioned the assembly on what the world has to lose by fully recognising Palestine as an independent State. He pointed out the generations of educated youth around the world are standing up for the rights of the Palestinian people, standing up in protest against the unjust and inhumane treatment of the Palestinian people.

President Solih called on the UN, on behalf of the Maldivian people, to fully recognise the Palestinian State with all the benefits and opportunities that membership confers and to extend the same privileges to the millions of Palestinian to have their individual liberties protected.

Continuing his statement, President Solih also expressed concern regarding the long-term peace and stability of Afghanistan, as a neighbour in the wider South Asian region, calling on them to ensure the safety of the people and the protection and realisation of the rights of women and girls. He urged Afghanistan to demonstrate its commitment to building a peaceful, durable and thriving country by taking steps to form an inclusive and representative government for the people. 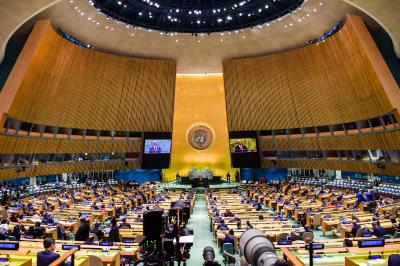 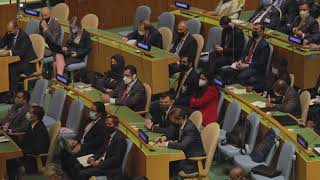