The new Non-Resident High Commissioner of the Republic of Mauritius to the Republic of Maldives, H.E Santi Bai Hanoomanjee, presented her Letter of Credence to H.E President Ibrahim Mohamed Solih, this morning at the President’s Office.

At the ceremony, the President welcomed the High Commissioner to the Maldives and congratulated her on the commencement of her term and expressed his confidence that during her tenure the existing bilateral relations between the two countries would further strengthen.

Speaking at the meeting the new High Commissioner conveyed greetings and well wishes from the Prime Minister and the President of Mauritius to the government and the people of the Maldives. She also added that serving as the non-resident high commissioner to the Maldives would be a pleasure for her, and expressed assurance in further cultivating the existing ties.

The President and the High Commissioner highlighted on the effective measures taken by the respective governments in combatting Covid-19 including the vaccination programmes carried out in both countries.

President Solih and the High Commissioner also discussed on the common challenges and vulnerabilities faced by Mauritius and the Maldives as Small Island Developing States. Further discussions were carried out on a variety of topics of mutual interest such as expanding opportunities for trade and commerce, increasing the current levels of exports and imports between the Maldives and the Mauritius, further strengthening of cooperation in the field of tourism, strengthening sustainable development, climate change, and other multilateral cooperation. 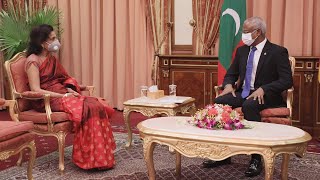