President Ibrahim Mohamed Solih has this morning paid a visit to the North Maalhosmadulu Atoll Alifushi Island Police Station and met with senior officials at the station. The meeting was held at the Raa Alifushi Police Station.

President Solih inquired about their work difficulties and challenges faced by officers in safeguarding the public and executing their duties. The officials shared their ongoing efforts as well as future plans, detailing the difficulties they experience in offering their services. They also stated that they are lacking in transportation facilities, human resources and repair services for police infrastructure.

Speaking at the meeting, the President stated that, as a result of the administration's effort to reform and improve the quality of the police force, Maldives' police have regained the public's trust. He also instructed them not to make distinctions between people, as the police are the most essential body in enforcing laws. Furthermore, the President discussed the government's plans to provide decentralised policing and the benefits the police service would receive as a result.

The President offered suggestions for resolving the issues in response to senior officials' concerns. He also stated that he would endeavour to swiftly resolve issues that are immediately solvable.

Following the meeting, the President took a tour of several boatyards on Alifushi Island, where he met with senior officials from boatyards to discuss their issues and operations. He also visited the Alifushi Island football field, currently in the final stages of completion. 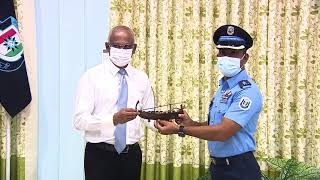 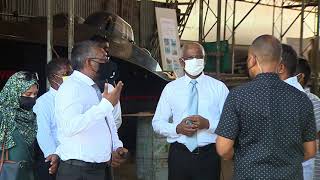 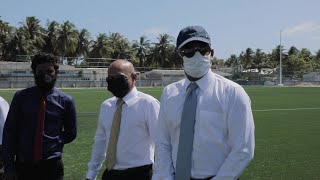