President meets Gaadhiffushi Council and WDC; President urges to work together for progress President Ibrahim Mohamed Solih has met with the members of the Gaadhiffushi Island Council of Kolhumadulu Atoll and the island's Women's Development Committee (WDC), tonight, urging them to collaborate and work together to bring progress and prosperity to the island. The meeting was held tonight at the Secretariat of the Gaadhiffushi Island Council.

The members of the Gaadhiffushi Island Council shared the most pertinent difficulties faced and needs of the residents of the island. Space scarcity and housing were among the main topics raised by the council, as well as access to healthcare, sports infrastructure and police presence to address some social concerns. The WDC members also shared similar concerns regarding the scarcity of space, highlighting their lack of adequate workspace.

President Solih addressed the concerns raised by the Gaadhiffushi Island Council and WDC, providing the latest updates on the progress of government projects. President Solih mentioned that the government would restructure the remuneration package for WDC members. He stated that the water and sewerage project was ongoing and that the school building project had been awarded to a contractor. In addition, he stated that the government is aiming to provide police presence in all inhabited islands within the next three years and that all other concerns raised during the meeting would be shared with the relevant government agencies to find speedy solutions.

The President’s visit to Gaadhiffushi Island is the seventh, and last, destination in his ongoing trip to seven islands of Kolhumadulu Atoll. Cabinet ministers accompany the President, as well as senior officials from the President’s Office and a delegation of high-level government officials. 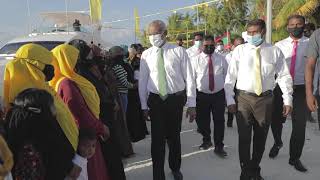