President Ibrahim Mohamed Solih has met with the members of the fisher community from Vandhoo Island of Kolhumadulu (Thaa) Atoll. President Solih assured them that government places great value to develop and expanding the fishing industry and that the government would solve all the concerns they have regarding their livelihoods.
Speaking at the meeting, the President highlighted that the Fisheries Sector played a key role in Resilience and Recovery Efforts during the Covid-19 pandemic, while all other major industries declined. The President listened to the concerns raised by the fisher community of Vandhoo and praised their invaluable service to the country, especially during the Covid-19 pandemic, highlighting that the fisheries industry was the only economic activity that was uninterrupted during the pandemic.
Members of the fisher community shared their concerns about not getting higher rates for local fish products in the international market and difficulties with fish weighing due to the scarcity of facilities. Addressing their concerns, President Solih reiterated the government’s commitment to ensuring fair and equitable rates for fisheries products. He shared details of his administration’s plans to expand the fishing industry and highlighted the efforts made to ensure local fish products gets premium rates in the international market. He also shared detailed plans to increase the number of Fish Aggregating Devices and the expansion of MIFCO facilities to enhance fish handling capacity, including the plan to re-operationalise Funaddoo Island of Thaa Atoll to accommodate the needs of the community.
Following this meeting, President Solih visited the Vandhoo Island Council and Vandhoo School and spoke with staff to inquire about their concerns.
The President’s visit to Vandhoo Island is his fifth destination in his ongoing trip to the seven islands of Thaa Atoll. Cabinet ministers accompany the President, as well as senior officials from the President’s Office and a delegation of high-level government officials.
SHARE:
Copied!
MORE PHOTOS 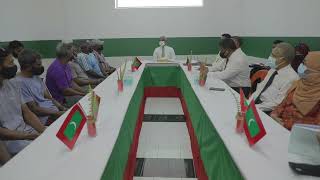