Upon his visit to Vandhoo Island today during his ongoing trip to Thaa Atoll, President Ibrahim Mohamed Solih has toured historical sites on the island.

The President visited Vandhoo Ziyaaraiy Mosque, Vandhoo Old Friday Mosque and Vandhoo Loa Ziyaaraiy, an old mausoleum. On his current visit to several islands, the President attaches high priority to visiting sites of historical significance and encourages the development of such sites as tourist attractions. The President also stressed the importance of maintaining and protecting sites of historical and cultural significance.

Vandhoo Loa Ziyaaraiy is a mausoleum where the tombstones of Bodu Edhuruge Haajee Ismail Dhoru Vannaa Kilegefaanu, his wife and their two offsprings from Hoadehdhoo Island is located, according to historians. The adjoining Ziyaaraiy Mosque is built from coral stones and depicts the architectural ingenuity, carvings on coral stones and timber lacquer work techniques of early Maldivians and is believed to have been built in the 1700s.

Vandhoo Friday Mosque is one of the oldest mosques on Vandhoo Island. Documentation from the mosque dates the construction of the mosque to 1297, which dates it as old as 147 years. The pillars at the mosque also contain lacquer work from past eras. 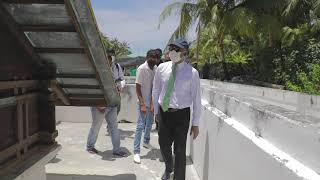