President Ibrahim Mohamed Solih has, this morning, met with the members of the Vandhoo Island Council and the Women's Development Committee (WDC), where councillors stated that the residents are satisfied with the development projects conducted on the island by the government. Councillors expressed residents' delight with several government projects underway at the island to address the needs of the public, such as the water and sewerage project, the new mosque project and the construction of the new Fenaka Corporation Limited (Fenaka) building.

Speaking during the meeting, held at the Secretariat of the Vandhoo Council at Vandhoo Island of Kolhumadulu Atoll, councillors also raised concerns from residents regarding their most urgent needs. They discussed protecting the island from coastal erosion, a waste management centre and introducing sports infrastructure such as a futsal field and outdoor gym. They also requested more police presence on the island, renovating the worn council secretariat building, and expanding the school premises to address space scarcity for students.

The members of the WDC detailed their operations to the President, explaining the work they undertake to promote and empower women in Vandhoo Island. They noted that there was a severe space scarcity issue, leading to issues with delivering programmes for the wellness and welfare of women on the island. The WDC requested the President to look into this matter and also highlighted raising the WDC remuneration packages.

Addressing the concerns raised by the Councillors and Committee members, President Solih shared the latest updates and progress on the projects underway and planned for Vandhoo Island. He revealed that the new mosque project was underway and in the tendering-evaluation phase. He said that the government aims to establish police presence in all inhabited islands in the Maldives over the next three years. Additionally, President Solih revealed that the government had decided to double the remuneration package for WDCs. He assured that he will direct relevant government institutions to work alongside the council to find ways to resolve the issues raised.

President Solih’s visit to Veymandoo Island is the fourth destination in his ongoing trip to seven islands of Thaa Atoll. The President is accompanied by cabinet ministers, senior officials from the President’s Office and a delegation of high-level government officials. 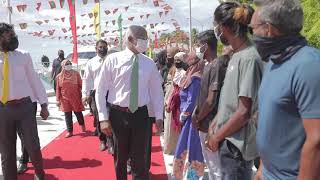 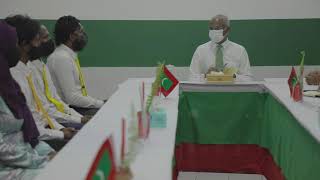