President Ibrahim Mohamed Solih has on Wednesday met with members of the Kolhumadulu Atoll Omadhoo Island Council and Women’s Development Committee (WDC). Speaking at the meeting, councillors expressed that the inauguration of the island’s harbour renews hope for the development of the island.

The President and the Councillors conversed about pertinent issues and challenges faced by the island in bringing the desired development to the island. Some of the issues noted by the councillors include the lack of facilities and the renovation works needed for the school. They highlighted concerns regarding the lease of land areas for fisheries and agricultural activities. They also spoke on the importance of sports infrastructure and the need for a youth centre to cater for social programmes.

Speaking at the meeting, the councillors also declaimed on ways to manage uninhabited islands within their jurisdiction and the challenges faced in facilitating the necessary resources needed for the advancement of the island health centre.

President Solih’s visit to Omadhoo Island is the third destination in his ongoing trip to seven islands of Thaa Atoll. The President is accompanied by cabinet ministers, senior officials from the President’s Office and a delegation of high-level government officials. 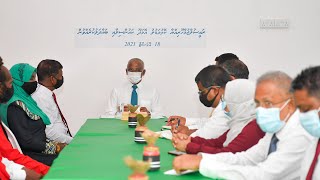