New Ambassador of Cuba presents his credentials to the President The new Ambassador of the Republic of Cuba, H.E Andrés Marcelo González Garrido, presented his Letter of Credence to President Ibrahim Mohamed Solih this morning, at the President's Office. President Solih welcomed the Cuban Ambassador to the Maldives and congratulated him on the ‎commencement of his term.

The President thanked the Ambassador for Cuba's generous assistance to the health sector and higher education sector of the Maldives. In this regard, the President highlighted that the Government of Cuba had been providing scholarships for Maldivian students from the Latin American School of Medicine. He also noted that the Maldives had received the services of Cuban doctors in the past. Both sides discussed exploring avenues to further expand scholarship opportunities for Maldivian students at Cuban institutions.

The President further conveyed his gratitude for the Cuban Government’s support to the Maldives in the election for the Presidency of the 76th United Nations General Assembly (UNGA) election. The Ambassador expressed assurances of Cuba's commitment to continue as a friend and a partner to the Maldives, highlighting that the Cuban Parliament also stands ready to extend cooperation with the Maldives Parliament. 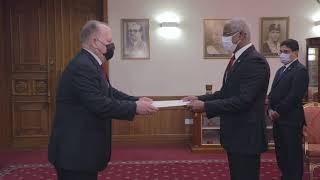