Vice President Faisal Naseem has met with the first two Paralympians from the Maldives to represent our nation in the Tokyo2020 Paralympic Games. The meeting was held this afternoon at the President Office.

Congratulating the athletes, Vice President Faisal Naseem lauded their determination and passion. He wished them success in the Tokyo2020 Paralympic Games.

The athletes also thanked the Vice President for his support and expressed their gratitude toward the Government for empowering and fostering more opportunities for para-athletes. The Vice President and Maldives Paralympic Committee highlighted the significant role played by the Minister of Youth, Sports and Community Empowerment, Ahmed Mahloof, to facilitate participation in the Paralympic Games.

In the first year of the current Administration, the Maldives Paralympic Committee was established with the aim to facilitate aspiring athletes to represent the dreams of all Maldivians in international sports arenas.

The first-ever medal in PARA Sport won by the Maldives was by Mohamed Mazin during the PARA-Sports 100-meter running event in the Indian Ocean Island Games (IOIG), held in Mauritius in 2019. 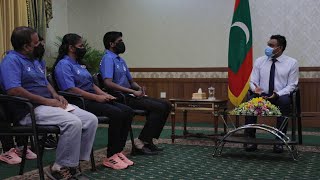