President Ibrahim Mohamed Solih, on Monday night, signed the Ministry of Health’s Book of Condolences honouring State Dignitary, Order of the Distinguished Rule of Izzudin, (late) Ibrahim Rasheed, who passed away on 31 January 2021.

In his condolence message, the President had stated that Ibrahim Rasheed’s services to the nation were invaluable and that his passing was an irrevocable loss, especially to the political arena of Maldives. President Solih highlighted Ibrahim Rasheed's efforts to ensure the country’s political and economic sovereignty at a turbulent time in Maldives’ history.

In his message, the President also noted that Ibrahim Rasheed had been a close, personal friend. He described Ibrahim Rasheed as a dutiful and selfless serviceman that future generations should look up to. The President offered his prayers that Allah (SWT) grant eternal Jannat for his soul.

State Dignitary Ibrahim Rasheed began serving the state on 24 November 1942 as a Secretary at the Bodu Store and continued his service in the Government for more than 65 years, in different capacities and positions.

Most notably, he served as Secretary to Former President Sumuvvul Ameer Mohamed Ameen during his reign as the President of the first Republic, and climbed several ranks during his service to the nation. He was also a key figure working alongside then Prime Minister, Sumuvvul Ameer Ibrahim Nasir, in securing the agreement allowing the Maldives complete political independence from the British empire.

He passed away peacefully at his home, at the age of 92. 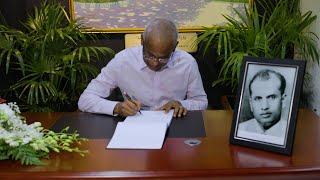