President Ibrahim Mohamed Solih has visited Felivaru Island in Lhaviyani Atoll and toured the island. He was welcomed warmly at Felivaru harbour area upon his arrival this afternoon.

During his tour around Felivaru Island, President Solih also briefly met with a group of fishermen onboard their vessel docked at Felivaru harbour. The fishermen shared concerns with the President regarding the availability of ice and fish weighing. He assured them that the Government is working on resolving the issues at the earliest.

The President made his first stop at Lhaviyani Maafilaafushi earlier this morning, where he inaugurated the Maldives National Defense Force's (MNDF) 66th Basic Training Course. He also inaugurated ‘The Basic School’ (TBS), a military training school under MNDF during his visit to the island. 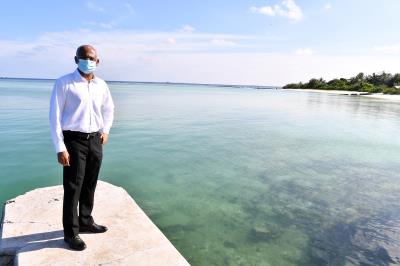 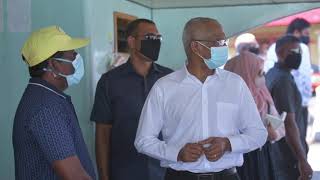