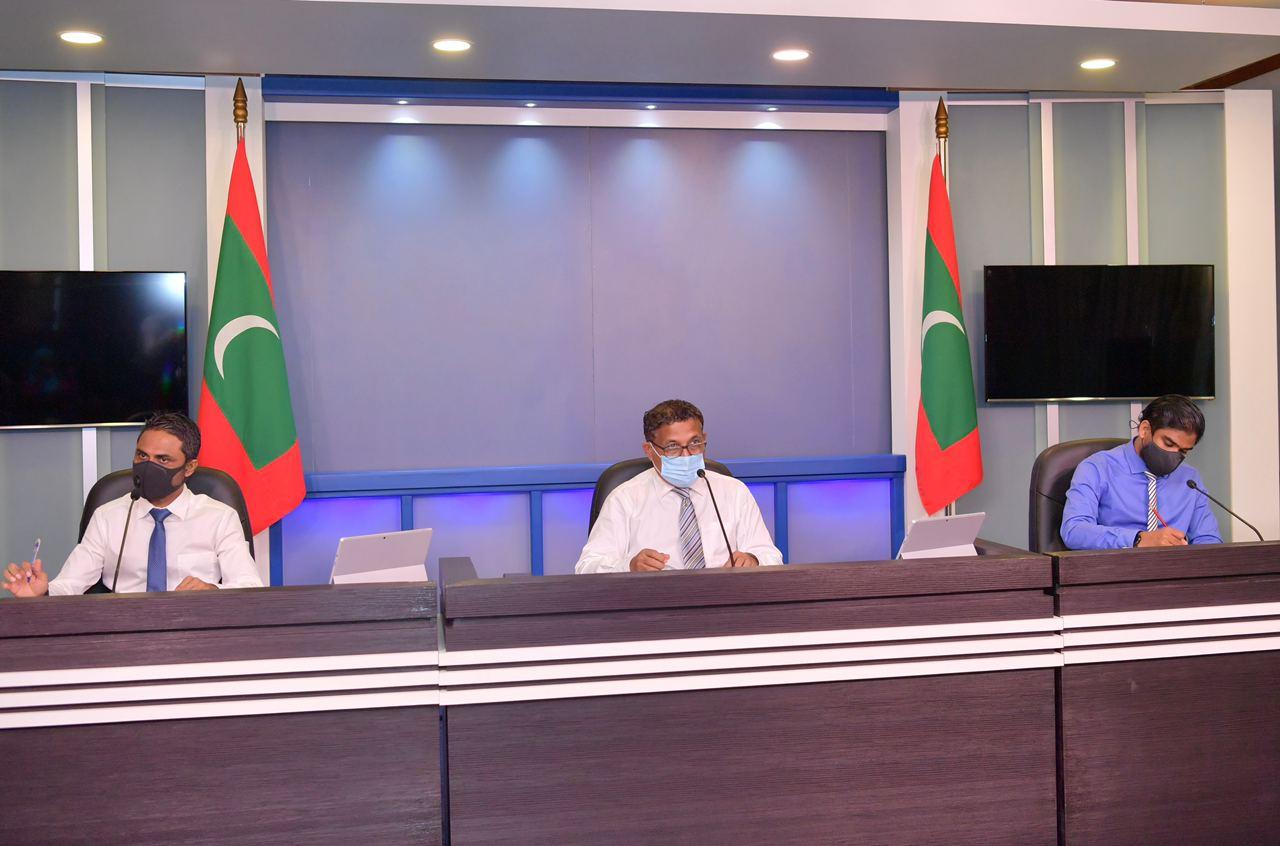 The Committee Investigating Public Housing Schemes has this afternoon held a press conference at the President’s Office. The press conference was led by the Minister of National Planning, Housing and Infrastructure, Mohamed Aslam, and Committee Members Uz Thoha Mohamed and Uz Ali Suhail Mohamed.

The Minister opened the press conference, speaking broadly on the Hiyaa Housing project and the Government's efforts to secure adequate accommodation to all citizens. He shared details regarding 6720 of the housing units from the 7000 housing units announced in 2018.

Committee Member Thoha Mohamed presented details regarding the scoring, re-evaluation and physical verification process for the applicant lists of the following Hiyaa Housing Project categories: H4 (Doctors and Nurses), H5 (Teachers), H8 (Malé Residents) and H10 (Persons with Disabilities and Families). He noted the Committee’s difficulties in revising the initial lists and rescoring them in light of challenges stemming from issues such as lists not being maintained separately and the lack of precision in checking whether or not applicants filled the mandatory information on the forms or had attached the necessary documents.

He elaborated on several other issues concerning how the forms were initially reviewed and scored. For instance, there were no standard guidelines relevant to enquiring into people’s living conditions beyond a written statement on the form, despite the weight given to this factor in the scoring process. Further, no provisions were provided in the scoring criteria to factor in whether or not the applicants already owned land. He also stated that no effort was made to ascertain the truth of the written statement regarding their current living conditions or how many children an individual is responsible for. Furthermore, individuals who at the time of their application had been registered in Malé for only one day were considered to have met the relevant criteria to apply for housing under that category.

Committee Member Thoha said that the Committee Investigating Public Housing Schemes went through a long and difficult physical verification process where teams visited the homes of each applicant to ascertain living conditions. He further noted the Committee also had to enquire into several other factors using resources from the DNR and NSPA, due to incomplete information provided in the forms and to acquire the documentation which had been missing from the applications. The new temporary list published in the gazette today includes each applicant’s original score and the revised score following the Committee's re-evaluation process.

Minister Aslam clarified that the applicants eligible for housing under the aforementioned categories must have scored above 50 percent during the review process. He also explained that residents of Malé would be prioritized for Hiyaa accommodation schemes in light of the fact that applicants eligible for social housing from the capital are unlikely to be able to acquire land or flats elsewhere in the Maldives.