President Ibrahim Mohamed Solih has this afternoon met the Councillors and institutional representatives of Rinbudhoo Island of Dhaalu Atoll. The meeting was held at the Secretariat of Rinbudhoo Council as part the President’s two-day visit to the island to attend the golden jubilee anniversary celebrations of Rinbudhoo School.

Moreover, the Councillors noted difficulties faced due to increased salinization of the freshwater lens of the island and requested for the expedition of the island’s water and sewerage project. They further shared concerns related to housing faced by residents who were displaced in the 2004 Indian Ocean Tsunami.

Deliberations were also held about enhancing the services provided by Government Institutions in Rinbudhoo. Some of the issues raised at the meeting include lack of laboratory services at the island’s Health Centre, and space constraints at Rinbudhoo School and office of FENAKA Corporation Ltd.

Speaking at the meeting, President Solih affirmed that the Administration would work with relevant stakeholders to address the concerns raised by the Councillors and institutional representatives. 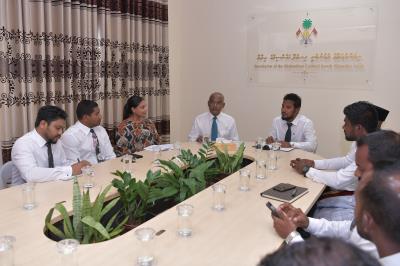