President Ibrahim Mohamed Solih has this afternoon met with councillors from Lhohi island of Noonu atoll. Discussions at the meeting, held at the President’s Office, were focused on the development efforts underway in the island.
Councillors discussed key developmental plans and efforts to improve the livelihoods of the residents of the island, including difficulties faced by residents due to a lack of space at the island mosque, challenges faced in the management of the island’s health centre, issues with proper waste management and difficulties faced by residents and visitors due to space constraints in the harbour. The Councillors also conveyed concerns regarding difficulties faced in provision of utilities such as electricity to government offices on the island.
Speaking during the meeting, President Solih affirmed that the Administration would work with relevant stakeholders to address the concerns raised by the Councillors. 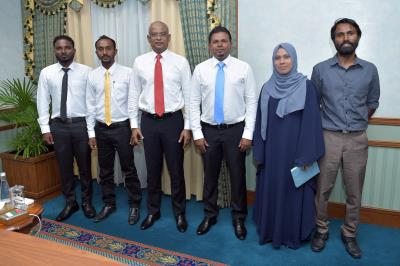