Discussions at the conference were focused on the challenges arising through the amended decentralization act, through which local councils are provided more legal and fiscal autonomy in developing individual constituencies.

Two sessions were held today, with President Ibrahim Mohamed Solih chairing its first session. Panelists at the session include the Speaker of the Parliament and former President Mohamed Nasheed, Advisor to the President, Mohamed Shihab, Special Advisor on Social Policy, Dr Musthafa Luthfee. The session aimed at examining the status of the existing decentralization act and the justification for opting to amend the decentralized system of governance and its benefits.

The second session of the day was aimed at creating awareness among councillors on how the amendment to the decentralization act has empowered councils, the changes to the allocation of budget and council's roles in decision making and in the implementation of future projects. The second session was also chaired by President Solih, while panelists at the session included the Speaker Mohamed Nasheed, Minister of National Planning and Infrastructure, Mohamed Aslam and the Minister of Finance, Ibrahim Ameer. A question and answer session was also held at the session allowing councillors to query panelists on related issues.

Speaking at the two-day conference, President Solih noted that the most important responsibility delegated to councils through the amendment is financial and legal empowerment.

'Viavathi Raajje' aims to create awareness among councillors on the challenges of governance and the development of constituencies while assisting councillors assume their new roles and responsibilities through the transition. 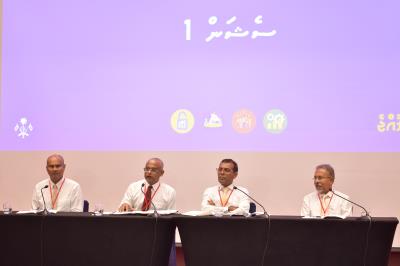