The SAP is organised, definitive, prioritised, and time-bound—the blueprint for a new era of development - President The SAP outlines the administration’s developmental targets and priorities for the five years from 2019 to 2023. It sets out realistic strategic goals that would help achieve key developmental milestones in realising the people’s hopes and dreams of a “Jazeera Raajje.”

The SAP seeks to change the perception of the government and the people towards national development; one which was previously pursued without a long-term vision, definite criteria for success, or provisions for government accountability. The results of short-term and unorganised development efforts have led to haphazardous outcomes; an overly congested capital, stark regional disparities in socio-economic and infrastructural progress, environmental degradation, unequal opportunities to accessing essential goods and services; and difficulties in accessing meaningful employment, quality education, and affordable housing; and a plethora of other issues.

The plan will be used as the administration’s overarching reference point to steer national developmental efforts. It is based on five priority areas; Blue Economy, Caring State, Dignified Families, “Jazeera Dhiriulhun,” and Good Governance. Listed under each of these areas are the precise steps the administration will take to accomplish them, ensuring that each step is time-bound and must occur within a specified deadline.

Highlighting that the administration’s highest priority is ensuring that all Maldivians can live a dignified life, President Solih said it is also the core impetus of the administration’s national development agenda. The SAP not only provides a comprehensive and accessible outline of the developmental plan for the next five years, but it also allows the citizens to hold the government accountable by making clear what its deliverables are and when the results can be expected.

Each sector of the SAP is composed of 33 different sub-sectors, where a results matrix is developed for each of these sub-sectors governing the primary implementation and monitoring framework, and guidance which SAP provides to the implementing agencies. Its measurement framework includes a timeline for the actions and targets for each of the policies in each sub-sector. It gives direction to all stakeholders; both government, independent institutions, State-owned Enterprises, non-governmental organisations and donors on what the development priorities are for the next five years. 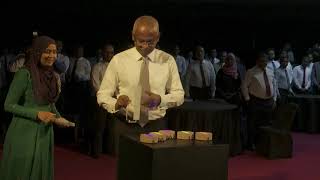 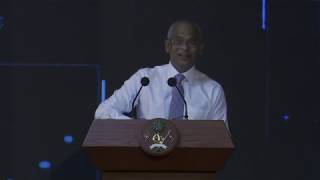