The stellar performance of Maldivian athletes during this year’s Indian Ocean Island Games held in Mauritius and the decision of the IOIG governing council to let Maldives host the next games, due to be held in 2023, were celebrated during the event.

Further Maldivian athletes who won awards in categories and subcategories from 6 major sports were presented with awards. Accordingly the President presented the renowned Maldivian footballer Mr. Ali Ashfaq with the award for Top Football player of 2018, whilst the First Lady honored and presented an award to the family of the late Sayyid Hassan, for his numerous contributions to Maldivian sport.

During the event, the IOIG medalists were presented with special prizes given by Ooredoo and Allied Insurance of the Maldives. Additionally, the Maldives National Football team were presented an award for their victory during the SAFF Championship 2018.

Moreover, a special lifetime achievement award was also conferred in the name of the late Zahir Naseer in order to honor the numerous contributions he made to the sporting sphere. 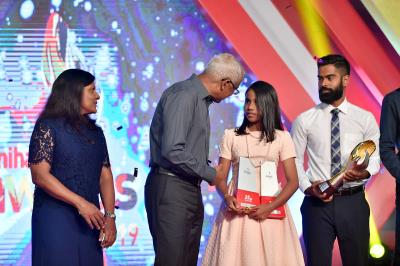