President Ibrahim Mohamed Solih has announced that his administration aims to encourage and empower persons with disabilities towards brighter and more fulfilled lives, as reflected in the policies of his government. The President stated this during his speech to commemorate the 'Riveli 2019' awarding ceremony; a collaborative effort from the Ministry of Gender, Family and Social Services, and the Council for the Protection of Rights of People with Disabilities.

Speaking at the event held at Islamic Centre today, the President highlighted that one of the fundamental pledges of his administration is equality for all Maldives' citizens. Further, it is the policy of his administration to enable persons with disabilities through sustainable development and rehabilitative options. The 'Centre for Mental Health' instated at IGMH earlier this year, as well as the establishment of a specialized NSPA and Aasandha counter at IGMH, are both initiatives under this pledge.

The President also made note of several key policies from his administration aimed to empower persons with disabilities and facilitate ease of access to necessities such as housing, health services, educational and training opportunities, as well as employment and entrepreneurship options.

Highlighting each of these important areas separately, the President noted preparations are underway to begin assisting families with persons or children with disabilities to receive easier and more affordable housing and livelihood options. The President also underlined that his administration would provide easier access to low-interest SME loans, specifically-aimed employment quotas, and special aid for securing educational opportunities. He noted that his administration already provides employment opportunities for persons with disabilities at several government institutions and SOEs.

Regarding health services, the President stated that a new 'Community-based Rehabilitation' program will commence in due course, increasing accessibility to therapy sessions and skills training. Further developments are being made in the Health Sector to improve the availability of pertinent rehabilitative and recuperative services. The President noted that special attention is being paid to the training and development of professionals in treating and rehabilitating persons with disabilities, and that steps are being taken to determine the number of persons and children with disabilities who have not yet registered at NSPA, to better provide them with the assistance and support they may require. There are approximately 15,360 persons and children with disabilities in the Maldives, but only 7,771 have registered at NSPA to receive government aid.

In addition to the President, Vice President Faisal Naseem, members of the Majlis and several high ranking officials from government institutions attended this awarding ceremony. 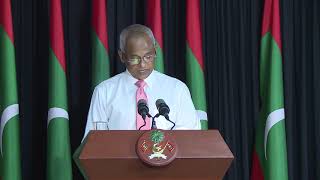 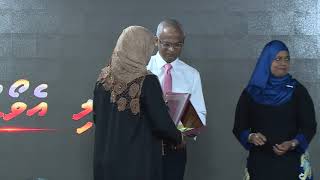